We’re Seeing Patients and Doing Our Part To Deliver You The Safest Level Of Care Under Guidance From The ADA and CDC. Call Us Today!

We pride ourselves on providing world-class cosmetic and dental implant dentistry that changes people’s lives for the better throughout Kansas City, MO, and surrounding areas.
Whether you are hanging out at the art galleries in the Crossroads Arts District, checking out the Neptune fountain at Country Club Plaza or you live in one of the charming Kansas City neighborhoods like Brookside, Hickman Hills, Red Bridge Armour Hills or Waldo in South Kansas City you’re sure to find our state of the art and reliable dentist office is conveniently located close to you. Our dental practice caters to everyone, making you feel comfortable and like family. One of the things that set us apart is, Dr. Gordon does not refer patients to other dental practices but instead takes care of all your needs here at our Kansas City dentist office.
Dr. Gordon’s dental team is highly-trained to provide a friendly and welcoming atmosphere created specifically to make you feel comfortable and relaxed for your visit. We use the latest dental technology to ensure that you get the best dental care available anywhere in Jackson County. If you are looking for a life-changing smile that will restore your confidence, look no further than the team at Gordon Dental Implants and Cosmetics in the City of Kansas City, MO. 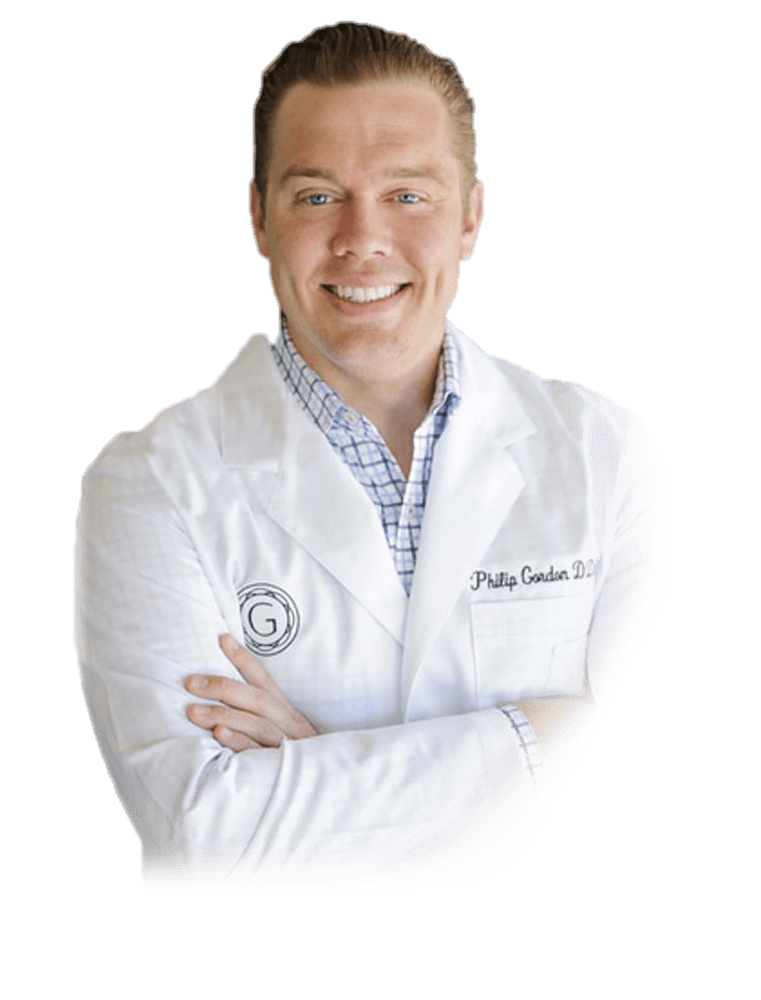 Dr. Philip Gordon grew up in Kansas City, Missouri, and has lived here most of his life. He received his bachelor’s degree in nutritional sciences from the University of Missouri in Columbia. His desire to learn about anatomical processes and biological sciences, combined with exposure to his father’s dentist office early in life are what influenced his decision to attend dental school.

See why many consider us Kansas Cities best dentist

We are a comprehensive Kansas City dental practice that specializes in dental implants and cosmetic dentistry treatments to restore your smile. Whether you need a complete smile makeover or a simple checkup, filling, or teeth whitening, Dr. Gordon and the team at Gordon Dental can provide the individual care and attention you and your family need.
Kansas City, Missouri Kansas, MO is a beautiful world-class city located in the state of Missouri along the Kansas-Missouri border. With a population of nearly 500,000 people, Kansas is by far the largest metropolis in both Jackson County and the entire state of Missouri. The city is also one of the largest and most populous cities in the nation. Kansas was established in the late 1830s along the Missouri River as one of the earliest port in the region. It was officially incorporated as a town in 1850 right before the establishment of the Kansas Territory. The city has since asserted its economic dominance as one of the principal cities in the Kansas City metropolitan area. In terms of popularity, Kansas City has for a long time been acknowledged as the capital of jazz music in the Midwest. The city is also popular for the signature barbecue, craft brews, and beautiful culture. We serve the entire Jackson County area.
Our preventive, restorative, cosmetic, and reconstructive dental services include:

Hear what our Kansas City patients have to say

We are dedicated to providing outstanding patient-centered care to patients of all ages. Our luxurious dental practice located conveniently near Kansas City has been designed with you in mind, and we are here to meet all of your dental needs.

You will feel welcomed, comfortable, cared for, and appreciated at Gordon Dental Implants & Cosmetics while we provide you with high-end, high-quality dental care in Leawood, Kansas and surrounding areas of Overland Park, Prairie Village and Kansas City metropolitan area.